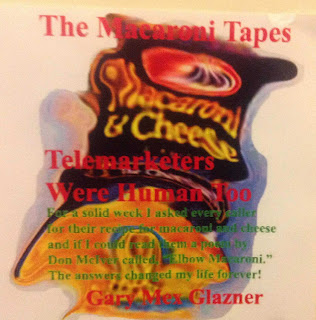 Back in 2004 in the waning days of telemarketing, I undertook a project that changed my life. For too long I had expressed my frustration with the “industry.” No More! Each time an unsuspecting telemarketer called I would befriend them and ask for the recipe for macaroni and cheese.

After the first call I would offer to read them the poem, “Elbow Macaroni,” by Don McIver and began to improvise with the poem blending it into the conversation. The telemarketers were surprisingly open to hearing the poem. Only one got really angry and threatened to switch my service.

The friends that I made that week and the circle of humanity I entered still leaves me glowing. Not to mention the delicious bowls of mac and cheese I have eaten.

Since the advent of the “National Do Not Call Registry.” there has been a decline in the endless calls at dinnertime. It almost makes me miss them.

On another note did you know that the first American recipe for Macaroni and Cheese is not credited to Thomas Jefferson’s aunt?