National Poetry Slam back in the Day 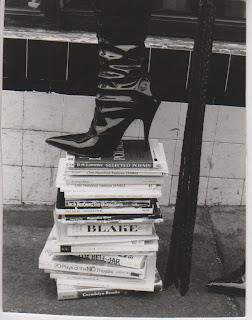 This is a photo I took in 1990 outside City Lights Bookstore in San Francisco. The model was Kate Proper. The image of the boot on a stack of poetry books was used to promote the National Poetry Slam (NPS) in the early days. It served as the inspiration for a series of NPS trophies. Cities riffed on the image with Austin doing a cowboy boot. Ann Arbor doing a work boot. In Stockholm at the Poetry Olympics in 1998 they did a sandal with sock. It was used on flyers and tee-shirts and was published by both SF Weekly and the Bay Guardian the week the Poetry Slam launched in San Francisco.
Posted by Gary Glazner at 6:58 AM