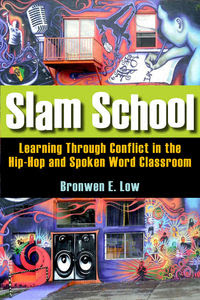 Yesterday, I attended a lecture by Bronwen E. Low the author of Slam School at Columbia Teachers College. First I love her name! I was in the building for another lecture but I saw the signs for Slam School and it got me thinking about the first time I used Poetry Slam in the classroom and I dropped in and caught the end of the lecture. If you are a poet-in-the-school or a teacher looking to further your knowledge on teaching poetry this is a wonderful book.

The room was packed with over 40 young people studying teaching. They were passionate about the classroom and about using hip-hop, spoken word, and slam poetry to reach young people. Ms. Low gave an example of a student who used the coded language of hip-hop in writing a poem. As her talk ended and shifted to Q and A the energy in the room roiled. Hands shooting up, everyone brainstorming, everyone thrilled to either already be a student teacher or soon to be. I wish some of our politicians who talk about “good” and “bad” teachers could have been there.

My first time bringing Poetry Slam to the classroom was at Rancho Elementary School in Novato, California in 1990. A friend of mine was a teacher there. I had told him about this cool new poetry thing we were doing in San Francisco and he invited me to try it at his school. We pitted two 5th classes against each other and used poems the students had written. One thing that really sticks out about that day, is that the student judges immediately figured out how to game the system to throw the contest and get the poem they wanted to win to win. Surprise! It was a poem about a pony.

One of the teachers had a long name, with for me unexpected consonants. I kept mangling it. She ran out of the room. Only later did I find out that she thought I was saying her name wrong on purpose and had burst into tears.
Posted by Gary Glazner at 4:19 AM