Darwin Inspired by his Grandfather's Poetry 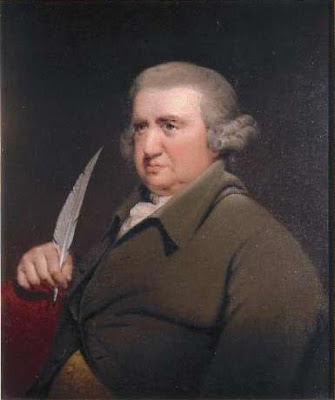 Here is a quote from an article in "The Guardian."

Darwin's long poem "The Botanic Garden" (1789) is one of the most extraordinary - some would say bizarre - works in English literature. Arching between two eras, it was a final exuberant flowering of Enlightenment experiment and optimism but also a glittering treasure trove of images and ideas for the coming Romantic generation, plundered by Shelley, Coleridge, Wordsworth. Four thousand lines of rhyming couplets humming above thickets of footnotes, with engravings by Blake, Fuseli and others, it consisted of two parts, "The Economy of Vegetation", and "The Loves of the Plants".

With wit and sly humour it mixed poetry, science and startling radical notions: a sheaf of "Additional Notes" explored everything from meteors to Wedgwood's Portland vase, from clouds and coal to shell-fish and steam-engines. Most disturbing of all to contemporaries was the poem's first hint of a new theory of biological evolution - 50 years before his grandson Charles published Origin of Species.
Portrait of Erasmus Darwin by Joseph Wright- c 1792-3 (or after)

For me the Times missed a crucial element by not including the full story of the Darwin family's poetry connection. Here are a few lines from Economy of Vegetation:

"LET THERE BE LIGHT!"
Astonish'd Chaos heard the potent word: -
Through all his realms the kindly Ether runs,
And the mass starts into a million suns;
Earths round each sun with quick explosions burst,

And second planets issue from the first;
Bend, as they journey with projectile force,
In bright ellipses bend their reluctant course;
Orbs wheel in orbs, round centres centres roll,
And form, self-balanced, one revolving Whole.
Posted by Bowery at 7:10 AM

Colbert! Penn! Pinsky! in the Meta-free-phor-all--shall-i-nail-thee-to-a-summer-s-day-

This is a great clip from April 2007.
Penn was a drinking buddy of Bukowski.
The opening clips shows Penn and Colbert as butterflies!
In the great evolution of the poetry slam this is akin
to walking upright! Why don't more Slams take this format?
Challenge to anyone organizing a performance poetry contest!
Posted by Bowery at 5:34 AM